Dávila grew up working in her parent’s taqueria minichain, and at the age of 20 became executive chef of their upscale Mexican restaurant, Hacienda Jalapeños, in Oak Forest. The 33-year-old has traveled all over Mexico, and cooked in some of the best restaurants in Chicago and Washington, D.C. In September, she opened Andersonville’s Cantina 1910, where she pushes “midwest Mexican” in new directions.

I always thought that cooks were the coolest fucking people in the world. I just always looked up to them. I remember how they would do tacos and how they would organize themselves and the kind of talks they would have. It was just interesting conversation to me. I always wanted to help. I’d always be pestering, “I want to do it! I want to do it!” Instead of doing my homework, I’d start filling the little side cups for salsas. Washing dishes. I’d be helping them cut onions. I’d be on milk crates and they’d show me how to take orders. I just always loved it.

At 17, I decided I wanted to be a chef. It was a magical moment. On Saturdays I’d always wake up super early with my dad. We would drive down to the city and go to Fulton Market to pick up produce and meat and everything the restaurants needed for the week. We would get up at four o’clock in the morning, and I would work all day Saturday. And it ended up being a custom that whenever I would get to the place that I was working, I would always make breakfast for the line cooks from my grab bag of stuff. They would all be hungover.

This was a time when it wasn’t popular to be a chef. Nobody was fucking doing that. This was my junior year and everybody was asking, “What are you gonna do?” And I sucked at school because I was just impatient. It just didn’t work well for me. I had no idea what I was gonna do. But it just all came together that morning. Everything was silent and I could hear the fucking sauce and I could see everything. It was tunnel vision. It was just, “I want to be a chef.” I could smell. I could see. I could hear. Everything was just there and I was like, “That’s what I want to be.” The feeling overcomes you. From there I didn’t want to tell my parents. I thought they were gonna be, “No. That’s loca. You’re just saying that because you’re always at the restaurant.” I didn’t tell them for I don’t know how long. I thought it was something bad. Nobody was doing it. I didn’t know how to go about it. There were only a couple of schools. When I finally did tell them, they were like, “That’s perfect. Why didn’t we think of that?”

“I could hear the fucking sauce and I could see everything. It was tunnel vision. It was just, ‘I want to be a chef.'”

When they opened Hacienda Jalapeños, our executive chef lasted maybe two months. I’d be lying if I didn’t have a little bit to do with why he didn’t want to work there anymore. I was like, “No, we’re not doing this right. This needs to be like this.” I’m like, “Your menu looks exactly like Frontera Grill.” There were a million restaurants in Chicago at that time and they all had the same fucking menu. Another one with garlicky shrimp with white rice and some, you know, pretty vegetables. Everybody does that. Everybody was doing the same thing. It was boring. And I didn’t want that.

At the same time, too, I had Grant Achatz’s food. I went to Trio, and it was, “Oh my God.” I had another epiphany about food. It was the first time I could see how food could be interactive and almost cartoonish to a point. One thing is plating something pretty, another thing is having food presented to you as an art form that makes you think. From my experience in Oaxaca I played with things foundations-wise. I remember doing a blackberry pasilla mole. Blood orange guajillo sauce with loup de mer.

I feel like Mexican chefs are at this place of revolution where they’re embracing the possibilities of what they have within their realm. They have a great foundation of history and a foundation of techniques that are not used anywhere else. They have every ingredient possible because they have every growing region that you could possibly have. The sky is the limit of what Mexican food could be. I want to do the same thing but do it here. That’s what I mean when I say “midwest Mexican.” Every pueblito does things differently. That’s why they do enchiladas different in Tijuana than they do in Zaragoza. 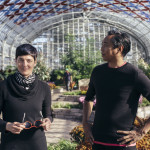