Twenty-one Chicagoans in their own words 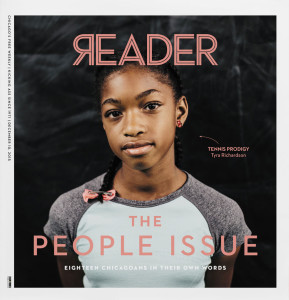 “Communities like ours are only as strong as the human capital they can retain and attract,” Juan Salgado says. As president and CEO of the advocacy and education organization Instituto del Progreso Latino, the recently designated MacArthur “genius” is speaking specifically of immigrant communities on the city’s southwest side. But the sentiment applies more generally to the whole of Chicago.

People, in many ways, make the place. That’s the basic principle that underlies this issue. The 21 Chicagoans featured are from all walks of life—different scenes or subcultures or professional worlds. What unites them, I believe, is absolute commitment, whether it be to diversifying the tech field or sustainable neighborhood development or fine beer service or even a robust wall of ivy. Hunger striker Anna Jones and concerned citizen George Blakemore have dedicated themselves to battles against city bureaucracy. Commitment to craft helped DJ Marea Stamper and experimental composer Jamal Moss weather years of relative obscurity. Twelve-year-old cover girl Tyra Richardson has devoted three-quarters of her young life to becoming one of the country’s shining junior tennis stars. Meanwhile, theater artist Stephanie Díaz and stand-up Junior Stopka are committed to staying here, flying in the face of expectations in their chosen industries that they would move coastward. If, as Salgado says, our community is only as strong as the talent we retain, Chicago’s doing just fine. —Jake Malooley